Chalk Sound National Park – many many shades of turquoise

Chalk Sound is a shallow cove of bright, sparkling water that is dotted with tiny fertile islands.

There are many unique aspects to this natural lagoon and a treasure trove of exciting experiences awaits.

Since Chalk Sound is a protected national park, motorized boats are not allowed, allowing for a peaceful and amazingly tranquil atmosphere. You can sunbathe on the pristine, white sandy beaches, take in the stunning panoramic views, or wade out to the rocky, craggy islands that are just waiting to be discovered.

Rock iguanas are prolific on the tiny islands, and they make their homes in the cracks and crevices of the rocks. They exist by foraging for plants, fruits, prickly pear cactuses and the occasional insect. The rock iguanas add a special treat for any visiting family or traveler.

You may also run into bonefish, barracudas, stingrays and the occasional lemon shark. Indeed, the waters are teeming with natural wildlife and this nearly pristine ecosystem is unparalleled in the Caribbean.

Should you be feeling a bit adventurous, rent a kayak and explore the electric blue waters that surround the islands, or even give stand up paddle boarding a go! See if you can find the twin engine airplane wreckage, covered in algae and preserved in the shallow depths of the water while kayaking or see if you can spot a hint of the underground cave system whilst snorkeling.

Regardless of what you do, you are in for a day of surprises, discovery and enjoyment all around. The Chalk Sound National Park is located southwest of Provenciales and is easily accessible by car. Kayak rentals are available at the nearby restaurant, Las Brisas. 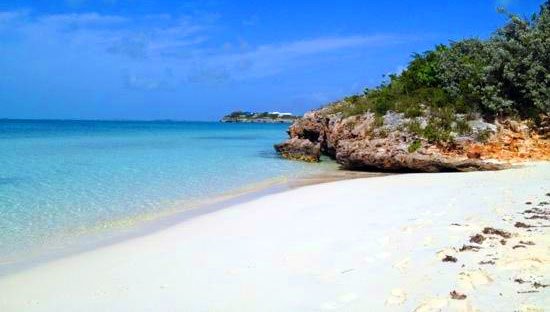 Sapodilla Bay is a long stretch of sheltered beach. The water is shallow and calm with no hidden currents or other dangers. It is an excellent spot for families with small children to wade out into the water. The sand is finer and more silt like than on most other beaches in Provo, and the occasional conch shell can be found and admired.

Also, of interest is the Sapodilla Bay Hill Rock Carvings. These carvings date back to the mid-1700 and 1800’s and are fascinating remnants of the history of the Islands. It is estimated that over 1000 ships were wrecked off the coast of Turks and Caicos during this time period……some of them were even treasure ships full of gold and other priceless wonders!  The carvings in the rock at Sapodilla Bay were carved by shipwrecked sailors waiting and hoping to be rescued. Some inscriptions include names, dates, symbols and drawings of buildings and ships. Inspecting these ancient carvings is the perfect end to your day trip to Chalk Sound National Park and Sapodilla Bay.